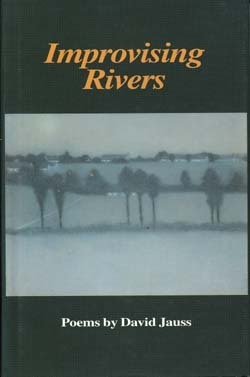 Please click here to purchase a copy of Improvising Rivers, a collection of "poems whose delights of form and language shine from every page" (Philip Dacey)


The grateful collapse of muscles
exhausted by pleasure. The ache

of calves, thighs, back, and casting arm
almost sexual. I lie on the bank,

six fat trout in my creel, the smell
of wild mint, and wind just barely stirring

the tall grass. I can't bear the fact
that one day I will no longer

see or hear or touch. Never again
this river, its song of here

becoming there. Never fog lifting
the hem of its skirt, nor trout

in pools, a lone cloud drifting
downstream like a raft,

is water over rocks. And never, even,
the word never, its syllables so sad

who heard thunder one sunny day
and fell, dumb,
to the hard Montana earth

breathing blood. Such beauty
on the other end
of this violence:

the golden fly slowly falls
through sunshot air
toward a river

full of reflected trees,
falls and settles
softly on the water


Tonight he's playing the Black Orchid,
the old Onyx where before his habit
he played with Bird, looking cleaner
than a motherfucker, Brooks Brothers suit,
marcelled hair, trumpet floating over
that hurricane of sixteenth notes no one
could have played sober--19, a dentist's son,
on stage with Bird and laying down shit
nobody ever heard before or since!--but now
his fourth cap of heroin's wearing off,
its petals closing up inside his chest so tight
he can barely breathe. Drunk again,
Bud hangs heavy over the keys, left hand
jabbing chords that break his right hand's
waterfall arpeggios: "April in Paris,"
and that strangely tropical odor of coconut
and lime in rum comes back to Miles,
the smell of Paris, Juliette Greco's sweet lips
as she sang, each syllable a kiss
for him alone. Juliette,
his trumpet moans, her small hands
on the small of my back, long hair black
on the white pillow . . . Even Sartre
tried to talk him into marrying her
but he'd gone back to America, to Irene,
and a habit. And though numerology proved
he was a perfect six, the Devil's number,
he drove the Blue Demon, top down, to East St. Louis,
Irene silent beside him, the kids crying
in the back seat, one thousand miles
to escape heroin and the memory
of Juliette's white shoulder. But now
he's back, alone, long sleeves
hiding fresh tracks on his forearms,
and it's not Bird but Sonny who's unraveling
the melody, looking in it for a way
to put it all back together again.
Then Wardell leaps in, This is it, man,
can't you hear it? They're dueling
like Ground Hog and Baby, the junky tapdancers
who buck-and-winged for dope on the sidewalk
outside Minton's, feet turning desperation
into music, and Miles joins them, his mute
disguising the notes he fluffs. He sounds
as bad as Fats, last May when they recorded
Birdland All-Stars. Glassy-eyed, nose running,
Fat Girl had to strain to hit notes
he used to own. 26 and just two
months to live. I'm going to kick this shit,
Miles vowed the night Fats died,
but here he is, blowing a borrowed horn
because he pawned his own to play
a syringe's one-valve song. If only
he'd stayed, if only he'd never come back . . .
Behind him, Art plays Paris dark
as a jungle, and Miles falls into her pale arms,
the dark hotel room, and he's lost, lost
and free, released from some burden he's borne
across the ocean, to this bed, this woman,
a burden that, lifting, lifts him
like music, one clear unwavering note piercing
the silence that defines it . . .
When he tries to explain, she tells him
that's existentialisme. "Existential,
shit," he says, "Let's fuck."
And she laughs, her mouth a red flower
opening under his. Then he kisses
two whole notes out of his horn, their beauty
painful as they vanish into the swirling
smoke of the Orchid, each note
unfurling, an orchid itself, its petals
falling and settling on the nodding heads
of grinning white Americans
who will never understand jazz, or Paris,
or him. He closes his eyes,
and for as long as his solo lasts,
it's not August, it's not New York,
and he is not dying.

darkness was on the face of the deep,
and the firing pin on the boy's .38
was broken, and God divided

light from darkness, and the owner
of Downtown Liquor emptied
his revolver into the boy's face and chest,

then pulled out the shotgun
from under the counter, and the light
He called Day and the darkness Night,

and since the boy died before sunset
it was day, technically,
when his mother left work and drove

not to the hospital to join her husband
but home, where she removed, one by one,
the blankets from their bed, the sheets

and mattress cover, then dragged
the mattress onto the floor and crawled
under its dark weight, and stars

appeared in the firmament, the sun
and moon also, and great whales
surfaced in the sea, birds wheeled

in air glittering with insects,
and cattle lowed in the billowing fields,
and when the boy's throat gurgled--

to her own throat, and God said
Let us make man in our image,
and the boy stiffened on the bloodstained gurney

while his father knelt, weeping, in the hallway
and his mother moaned beneath the mattress
she wished would crush her, and across town,

the night lit now with neon,
the local hero reloaded, his fingers trembling,
and God saw everything that He had made.

in memory of L.H.


A dozen years ago, my student still,
you watched streetlights and stars mottle
your rainstruck windshield into waterlilies
and drove through that dream of Giverny

into a parked car. When you woke, headache
stitched into place, you knew how much beauty
could hurt . . . For years I told this story
to the students who followed you, to make

its easy point. What did I know then
about beauty, the pain of words colliding
with desire, the shattered glass and twisted steel
of loss? Today I read your poems again.
Lynda, I wish I could tell you how beautiful
their light is through the killing rain.

Tonight, the wind winds down the hill
to the house we refuse, for a moment,

to enter. So what if we're cold, our skin
stippled with goosebumps, and the firewood

is waiting for the match? We linger
a moment longer, looking up

nor the last. Time is as vast
as this sky, and as dark,

yet we are made of stardust, the calcium
in our bones and iron in our blood

the fallout of the first supernovas,
and the wind, that original music,

still strums the leaves in our yard
and the woods beyond. Its melody will last

almost forever, yet we listen as if
we will never hear it again. In a minute

we'll go inside and light the fire
then hold each other, as others after us

will hold each other, and watch the temporary
take flight, the sunlight that wound the logs

escaping at last, sparks rising from the flames
like stars returning home.